A movie created in a relaxed state to make a charming story. The natural bumps of accidental made me think to myself why I watched this movie? Perhaps for some reason perhaps not, the only certainty is that we will never find a way to measure or explain it.

What is really going on? And how to accept all these random things? Why are you making a 1-week, 1-month, 1-year, 5-year plan that you know for sure about completing it? And do we really have free will?

Three Colors: Red (1994) - Just a coincidence
Three Colors: Red opens with a guy calling his lover Valentine (why is "his" because his desire to possess in love is very high). And then a Auguste law student in a nearby apartment calls his girlfriend to make a weather forecast over the phone to hear her voice (Karin).

A motive that you think is specific and arises and you think you are choosing to call one person, that is, the rest of you are ignored.

Three Colors: Red has always been simply a coincidence: Valentine encountered a red light and wounded a pregnant dog that led to an encounter with his bored old owner - the man named Kern earlier. being a judge and retiring into a wiretap phone line;

Valentine and Auguste - two people in two apartments where the windows can look at each other, countless times have come so close to each other but never had a meeting and greetings - maybe that could happen. in some parallel universe.

All of the characters in Three Colors: Red, they don't need the specific motivations like in Hollywood movies to achieve an achievement. They are simply pushed into this chaotic life, with a cascade of random things, people like Kieslowski once said, they are "the same - hopeless alike, unable to cope with life and suffering." in love the same way. They die and they are born. ” 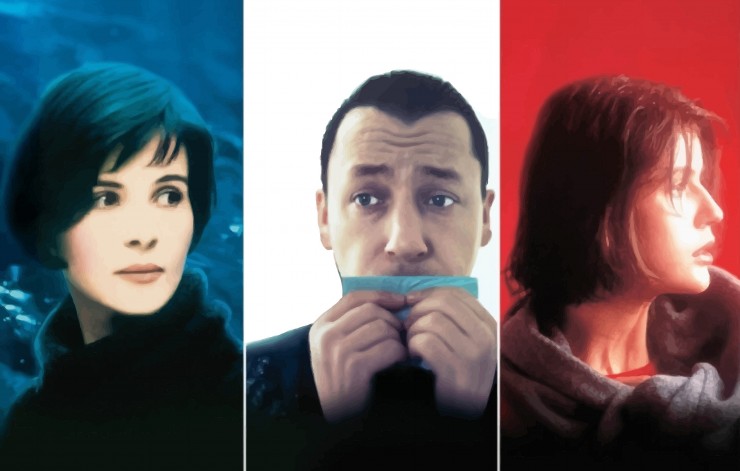 But that doesn't mean there are no warnings in this world. Valentine - a typical beloved character in Kieslowski's film. There is sadness, tragedy, but more importantly, the spirit of readiness to grow.

An extended life of Veronique in The Double Life Of Veronique (1991), the only one who helps an old woman after three parts of the film can put the glass bottle in the trash.

She saw a miracle about something that was about to happen, something bad. Try to explain why Valentine chose to go on a ship with very few survivors (including her) that she should have chosen to fly: obviously suggested by the retired judge Kern, but why why did she agree and why did Kern suggest that she take the train? Because Valentine has feelings for Kern?

Because Kern wanted to tell her the story of a sailor - the key character that led to the most traumatic story he was hiding and clearly meant to tell Valentine - that was how he started.

But there will be many more unanswered questions here. Why is Valentine one of the few surviving characters and all the survivors are characters from the previous two episodes Blue and White? Is Kieslowski not too fond of his character and wants to be God here? Or he simply felt that they were the only people who deserved to live.

Three Colors: Red brings a simple mysterious message of life that everyone encounters, that is the next step of all of us who are probably not always selected or rationally calculated, we are fooled by something we are never aware of.

A pessimistic conclusion about life, because it is only for those who do not doubt and move on, accepting the unresponsive and bewilderment of things to come (including death).